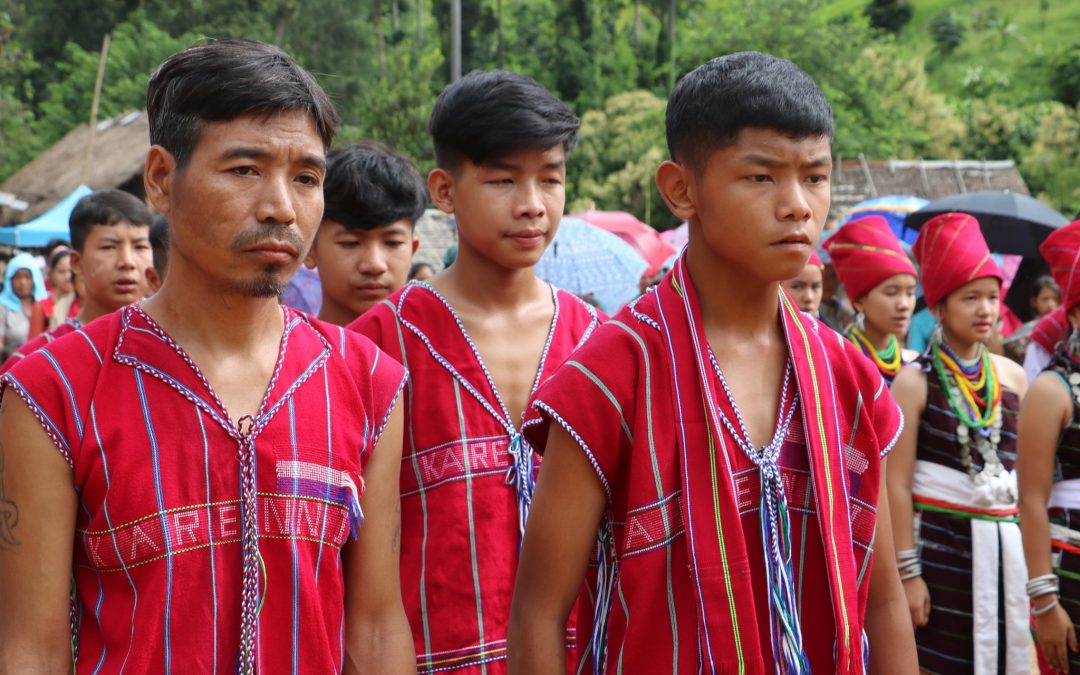 For a few days, every September, the Karenni hills are alive with the sound of children singing and playing as they head into the forest. Carrying axes and saws the adults lead the way to a large tree to cut down. As the group haul the log back into the village, women and younger children come out of their huts. Music plays and sacrifices are offered, chickens are killed and de-feathered, the meat is taken away and offered around to neighbouring villages as a show of good faith, community and tradition.

The festivities though, are more than just a cultural practice, it’s an act of resistance and revolution. These are the Karenni people, my people. We’ve lived through 50 years of repression, 50 years of war, 50 years of displacement. For us, our culture and our identity is something we dare not let go, in case in the vacuum of war it’s lost forever.

Over one hundred years ago we resisted the strength of the British colonists and still today we live in a state of resistance. As we’re not many in numbers, around 500,000 people, we are often overlooked in the Burma Civil War, but what we lack in numbers we make up for it in strength and resilience. From our rebel soldiers in their bases, to the orphans in the refugee camps, there’s an identity we all share and hold, an identity that few outsiders can understand.

It’s not just our soldiers who fight imperialism with guns, it’s the farmers, the teachers and the refugees, every single one of whom resist, through embracing their identity, remembering their past and enduring through their present suffering.

Violence and peace respectively can have very different meanings. Bombs and bullets don’t reach the refugee camps, but who could say the residents live in peace? The violence of a family broken apart by war, the violence of going to bed hungry or the violence in traumatic memories, PTSD and deep depression.

People in the refugee camps, on the Thai border, have a lot of time on their hands to think about these things. The majority are not permitted to work so they just sit around, thinking, trying to find meaning in their suffering. They drink to find an escape from reality. So many of us have trouble sleeping, it drives you crazy, it makes you sick.

The Thai government would prefer us to not be there, our existence is a frustration for them. There are people born in the camp, 40 years ago, who have never left, lack of freedom and no options. It can feel like an open-air prison in the middle of the jungle and they’ve been prisoners since birth.

We’re denied a dignified life. We just want to live peacefully, to sustain ourselves, to work, to be useful, to contribute to the world, but no, we’re forced to be a burden.

Thai people always ask: “Why don’t you go back to Burma?” I don’t think they can imagine the fear, the danger. Go back to our villages that have been burnt to the ground, the place where our fathers were murdered and our mothers were raped.

Do we have a choice?

In the forest however, on our sacred days, the children are still singing and the music is still playing. People are smiling, laughing and dancing. This is what it’s like to be Karenni, we’re stoic, funny, easy-going, we don’t give a fuck. If something goes wrong we just laugh it off, we have to, because the trivial things have no meaning. When you’ve lost so much you have to appreciate what can’t be taken away. Your identity. Dancing around a tree with your neighbours, your family, and your people.